On 5/22/2017, Changyou [CYOU] received a preliminary non-binding offer from its chairman Dr. Charles Zhang, who is also the CEO and Chairman of Changyou’s parent company Sohu, to take the company private with and offer of $42.10 per ADS. The offer letter can be seen here: http://ir.changyou.com/05_22_2017.shtml. It is interesting that it is Charles Zhang, the person, not the parent company Sohu, to make the acquisition.

As a current CYOU shareholder, I think it’s a OK deal despite I had higher expectation of the turnaround execution which just started to show some positive signs. As of 5/31/2017, there is still about 8% spread between the close price of $38.9 and offer price $42.1. If the deal could be closed timely, it would be a good risk arbitrage opportunity.

Inspired by this event, below I did a general study of all the Chinese ADR “go-private” deals in past few years. I’m keen to get answers to these 3 questions (which could help me evaluate upcoming similar deals’ risk/reward):

Let’s begin with a rough understanding of a typical ADR privatization process. Credit to a Credit Suisse’s study [link here], here is a great chart showing the 6 milestones of such a process. 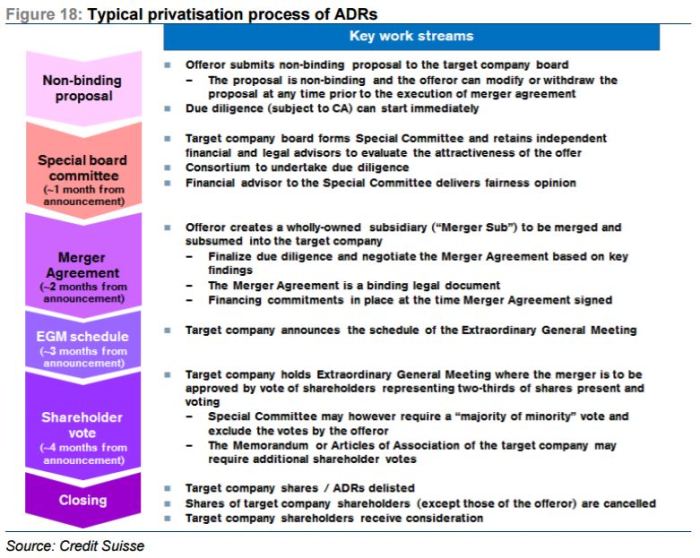 It is also important to understand the main incentive of such privatization deals, specifically for these US listed Chinese companies. Like most of the PE backed LBO deals, Chinese ADR privatization deals also target for a relist for higher valuation. However the difference is that, rather than streamlining and growing the businesses for a few year in private arms (in LBO cases), the Chinese ADR companies could seek a faster re-valuation by relisting the firm to its home market (which offered richer valuation, especially back in 2015 before the crash). This also explained why there were so many proposed deals announced in 2015.