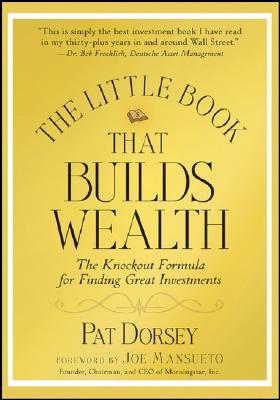 [The Five Rules for Successful Stock Investing] is a thorough book talking about the whole investing process (from having a philosophy, analyzing company to valuation), and the gem is the by-industry moat analysis frameworks the second half of the book was attributed to. [The Little Book that Builds Wealth] is a “the little book” series piece and essentially is a shortened and perfected version of the first half of the 2004 book, with heavy emphasis and elaboration on the economic moat analysis.

Based on his thinking process and writings, I think Dorsey is one of the greatest simplifier who can dumb down very intricate concepts to simple ideas and then generalize them delicately to make the underlying knowledge easily transferable. These two books are among the most practical ones I have ever read, and I highly recommend them for anyone interested in learning more about economic moat study. An imprecise comparison is that investing is like shooting, you have to practice constantly to get better in long run. Most of the books talk about the shooting technique (philosophy & process), Dorsey’s books also gave you a load of ammunition in addition to the technique.

Below are important thoughts/notes while I read through these two books, I document them here so I can refer back if needed in future:

Last, some more resources about Dorsey.

– A great presentation of his key ideas @ Talks at Google

– Recent podcast with Patrick O’Shaughnessy on 8/22/2017 (which covers extensively about his firm’s investment process, as well as his new tenet about identifying good capital allocators) : http://investorfieldguide.com/dorsey/

– Dorsey AM’s early days pitch deck (AUM back then was still $78M, now north of $200M), which has detailed investment process of the firm:  DorseyAM_PitchDeck