I always liked Howard Marks’ famous memo and his thoughts in various interviews, but only got chance recently to read his book [The Most Important Thing – Uncommon Sense for the Thoughtful Investor]. 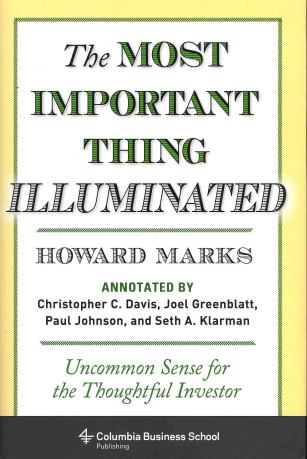 Below are some topics that are most insightful for me.

Within this book, as well in Marks’ past interviews, pendulum, which continuously swings from one end back to the other, was mentioned many times as a metaphor to illustrate his view of world, markets and human sentiments. Marks also revealed his spiritual root for such a philosophy, dating back to his Wharton days when he picked up Japanese Studies as the obligatory non-business major and learned Mujo (無常, a Buddhism doctrine means “Impermanence”). Not only Marks credited his Japanese Study by claiming “they contributed to my investment philosophy in a major way”, I believe he also passed along such philosophy to his decedents, as indicated by his son Andrew Marks’ plan to name his new money managing business after “Anicca”, which is Impermanence in Pali, the “native” language of Buddhism.

I found this view resonates closely with Taoism philosophy. One of the Taoism doctrines heavily shaped my view of world is: “Reversion is the motion of the Tao” (反者道之動). It states the universe is constantly moving from one extreme back to the other, like waves ebb and flow and moon phases from crescent to full. By extension, life (for most people) is moving constantly from favorableness to adversity.

There are additional inferences from this doctrine. For example, one famous Chinese saying says “物極必反”， which means “things went extreme are ought to reverse” literally. Taoism also provides additional explanation on why universe moves like this. Things moves between extremes is simply because the two poles are mutually-inducing, as another Taoism saying puts “福兮禍之所依，禍兮福之所伏”, for which I would use Marks’ words from the book as translation “success carries within itself the seeds of failure, and failure the seeds of success.” His elaboration is so great that I’d like to quote below for my own future frequent reference:

Cycles are self-correcting, and their reversal is not necessarily dependent on exogenous events. They reverse (rather than going on forever) because trends create the reasons for their own reversal. Thus, I like to say success carries within itself the seeds of failure, and failure the seeds of success.

The most important take-away from this discussion, especially for young investor like me, is that you have to keep a clear mind and calm brain during extreme market conditions, euphoria or depression, and resist temptation or fear to be part of the herd.

Although Buffet had discussed extensively about the real risk of investing being possibility of permanent capital loss and dismissed the volatility as the risk approximate. Instead of despising the entire Modern Portfolio Theory (MPT) (probably because of his alum attachment to Chicago University Business School), Marks tried to (also did a good job in) fit his value investor perception of risk into the MPT. The key new notion Marks clarified is the probability of outcome and the expected value of outcome. As the below screenshot shows, all the theories focused on the “expected” outcome which is a single number, however as a value investor, you have to consider the range and probability of the outcomes.

Marks also made it very clear that the risk of an investment is largely determined by its PRICE, rather than any other fundamental factors (like quality of the business) or technical factors (like the volatility of the price). High yield bonds (or using its more notorious alias, junk bonds) are by itself poor quality assets with volatile price profiles, however Oaktree Capital could achieve higher risk adjusted return by committing to only these has very low price relative to their value. Or put it another way, Oaktree operates in high risk asset class, however paying very “safe” prices to control the risk.

What’s funny is that Oaktree does NOT have a “Chief Risk Officer”, according to Marks’ recent interview with CAIA Australia, even he spent whole 3 chapters in his book talking about risk. This is because, as he put, each and every one in Oaktree is a risk officer, and rigorous risk assessments on the possibility of permanent capital loss are performed by analysts and portfolio managers before any individual capital commitment.

Lastly, Marks also pointed out the important difference between “risk control” and “risk avoidance”. My understanding is that “risk control” means that you still try to invested as fully as possible however take effort in selecting only positions that has limit downside, thus keeping the full upside of the portfolio while avoiding potential loss. On the other hand, “risk avoidance” means that holding too much cash because of risk aversion which would avoid return eventually. As Marks also pointed out in a later chapter “Adding Value”, the value add as an investment manager is to provide an asymmetric return profile, which returns more in good time, but limits loss (or better yet, not loss) in bad time.

– Be Aware of the Current Market State

Traditional value investing wisdom usually suggests that good investors hold though market cycles, thus the cycle is of no importance. Marks has a slightly different view here. Albeit still dismissing market timing, Marks stressed the importance of having a sense for where the market stands. Using the pendulum as example, no one will be able to tell when the bob is going to reverse, however, using some market observation, an investor should be able to tell where approximately the bob is in its trajectory. For example, is it on the left or the right side of the equilibrium? And is it closer to the equilibrium or to the extreme?

Marks provided a market temperature assessment framework which almost all the annotators of the book (who are all well-established investors) deem ingenious. I’d like to quote it below also for future frequent reference.

This is probably more anecdotal than insightful, but I was really surprised to learn that Marks was at University of Chicago’s Graduate School of Business in 1967-1969, when he talked about his connection to the rise of the so called “Chicago School” of the modern market theory. If he was in business school in 60s, that means he’s born 40s if not 30s, which would put him in his 70s now… Based on his latest appearance in financial networks, I always thought he’s probably in his early 60s at most… Take a look at his most recent appearance in the CAIA Australia Interview below (12/22/2016), what would you guess if you don’t know anything else about this person? 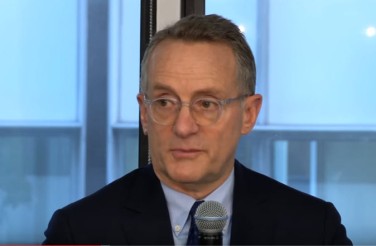 Accordingly to his Wikipedia page, Marks was born 1946 and just turned 70 this year! I would only speculate that Marks must really enjoy his work & life, and have a good life philosophy.

Lastly, I would recommend this Youtube playlist compiled by Oaktree Capital, mostly featuring Howard Marks’ public event appearance. You really can learn a lot by going through his presentations and interviews.

The one @ google talk worth some special mentioning as Marks tried to provide a holistic view of his investment philosophy to a non-finance audience group, thus very suitable for investing beginners.