You’ve heard “Internet Finance” is booming in China, but what exactly is it? It all began from the inception of Alibaba’s Yu’E Bao (literally means balance treasure) in 2013. Metaphorically speaking, it’s like your Paypal account balance which is as liquid as your checking account, but EBay is paying you 5% interest yearly. Wait, what?! I know what you are thinking, no, I did NOT miss a decimal point. Since I was away from the country for years, I haven’t really paid close attention to this business model until recently.

It was about two months ago, one family friend from China asked me about investing in real estate in US. A REIT name – Inland Real Estate Corporation [NYSE: IRC] looked very attractive to me then and I recommended it to him (see my older post here). The company then hit the 52 week low at around $8 with yield of 6~% and FFO multiple of 8, and seems to be oversold compared to its still solid property portfolio and operation. As we are speaking now, it was announced to be bought private by DRA Advisor in a $2.3 million deal, paying $10.6 per share. However, my friend decided to pass on this would-be 20+% in two months opportunity because he wasn’t interested in investing in a non-principal-guaranteed asset for 6% yield. “I’d better off put my money in my XX Bao, which gives me up to 10%.” he said. Well, that is very impressive, especially they “guarantee” principal, so basically making it a “risk free” investment. I then asked two question: who are they, and what type of asset they have to invest in to give you that return? “I don’t know, why do I care when they guarantee my principal?” replied my friend.

After some research, I think I find some clue.

Put it simply, “Internet Finance” is the evolved and modernized “Shadow Banking”, and a direct product of lacking of private owned banks in China. A few years ago, the hot topic for Chinese economy was shadow banking, however you hear it much less now. They are not gone, actually they came out of of the “shadow” and re-branded themselves as “p2p internet finance companies”. Both of them runs on the same business model. On liability side, they absorb deposits from ordinary investors with high interest rate. On asset side, they invest in high return (which translates to high risk, most of the time) assets and pocket the spread (some time in the form of fee) as profit. I always think banking in China is a great business model, because the whole private sector credit was not serviced at all by the monopolizing but incompetent state owned banks, but the hyper high rates still confuse me.

How did they do it?

This is the fascinating part. I found there is wide spectrum of asset deployment methods among these internet finance platforms to achieve (for some of them it’s actually “achieve”, with the quotes) these high return, ranging from legit money market fund to high risk loans to private enterprises or individual customers, and even to sleazy Ponzi scheme. Let’s take a look at a few examples.

Yu’E Bao – is an example of money market fund. It is managed by Tianhong Asset Management and in escrow of Citic Bank. End of Q3 2015 holdings below. You can see the two big pieces are 17.91% bonds and 81.01% bank deposit, and the top 10 bond holdings are short term major Chinese banks and financial institutions. With China’s central bank monetary easing in the past two years, this product’s yield now goes down to about 2.8%. 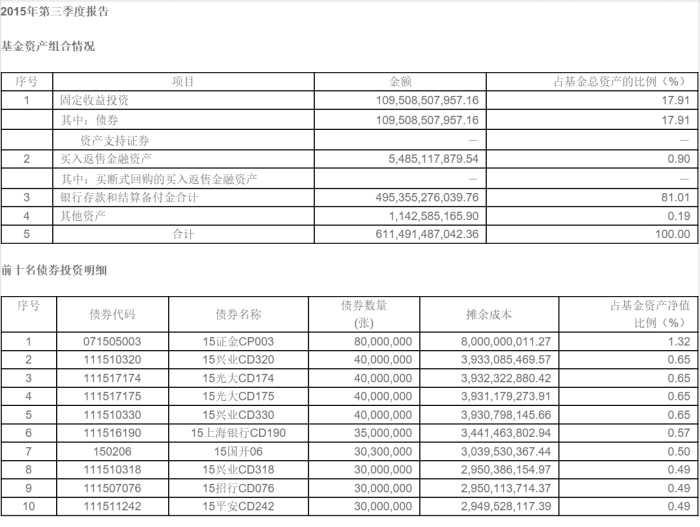 Yiren Dai [NYSE:YRD] – Yiren Dai is basically the Chinese counterpart of Lending Club [NYSE: LC], matching up individual lenders and borrowers. It just went public in US on 12/18/2015, thus had more media coverage and public information in English. Based on the description from the official website, the investments are purely prime individual borrower loans. The investor (or lender, to be more precise) can either allocate their capital by participating in loan applications themselves (where you can view the qualification of the borrowers and make decisions on whether and how much to lend), or put capital into multiple maturity based Yiren Dai managed pools which run algorithms to allocate the fund automatically. The expected annualized return ranges from 6% to 10%, depending on the maturity.

What’s interesting about this business model is that the platform strictly positions itself as a loan matching agency, citing multiple times form Chinese Contract Law. It means that it charges directly matching fees instead of lives on interest spread, meanwhile tries to shift majority (if not all) of the default risk to the investors (sneaky move, Yiren Dai, but how are you going to classify your algo method? it’s essentially a bank model where you allocate capital for your clients).

Below are more info of this firm in English.

E-zu Bao (literally means “e-Leasing Treasure”) – This one is an example of how sleazy business took advantage of the “internet finance” model to run  Ponzi scheme. In July 2014, it firstly emerged as a legit platform focused on financial leases investing. According to some screenshots of the website, it offered 14.6% annualized return (see below).

But just one and half years of time proved it to be a completely Ponzi scheme. The business owners just ran away in early December 2015, owing investors deposits worth 40 billion RMB ($ 6.3billion). The way they built the pyramid was simply: 1) using related parties to fake most of the leasing projects (that been said, some projects might be real, but the rates were still fake because lately it was revealed that one of the equipment leasing arms of the parent holding company was leasing equipment at 6%, much less than its promised rates of 14.6% to the depositors. See below charts for an example of a grain processing equipment leasing project) and 2) aggressively marketing the product by employing a huge sales force and bombarding multiple commercial channels (An interesting anecdote was that it had bid prime time commercials on CCTV, the most prominent central government controlled TV station, for which the firm’s sales frequently used as a proof of legitimacy.)

Overall, I think if properly ran, the internet finance solution could help mitigate the information asymmetry problem rooted in the Shadow Banking era as these companies would perform as risk assessing intermediaries between the end lenders and borrowers, leading to a more efficient credit market. However, it may still have long way to go as the market is so unregulated and risks are abundant in multiple layers for investors (platform default risk, liquidity/bank run risk, borrower default risk, platform security risk, etc.)

Ironically, after reading through all these products’ terms, agreements and prospectus, I didn’t find a single legal clause indicating “guaranteed principal”, at most some products put words like “try to keep the principal” in marketing materials. This shows how naive and unrealistic Chinese individual investors are. Finance, especially risk, education for the main street is still long way to go for China’s asset management business.

Lastly, for the regulator, they should catch up and set up proper barrier for internet finance industry, to weed out any potential wrong doers. At the same time, they should loose the private owned bank ban. With possibility of running banks, legit private capitalist would certainly seek bank status, and all these well established banking regulations can be applied to them. It will also help investors to distinguish good apples from bad ones much easily.